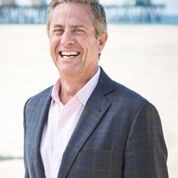 Back in 1914, surf legend George Freeth, was commissioned by oil tycoon Henry Huntington to surf Huntington Beach and bring tourism to the City that bears his name. Freeth opened the Huntington Beach pier with “dazzling feats of balance and dexterity that people had never seen before” on an 8-foot surfboard made of redwood, cementing his iconic status in history as the Father of Modern Surfing.

A hundred and three years later, Kelly Miller, the CEO of Visit Huntington Beach and SurfCityUSA.com, portrays the character of Freeth and joins us for a look back on how surfing became the iconic sport of Southern California.